In Robert Eggers’ latest film The Lighthouse both story and setting are stripped down to the essentials: there is a remote lighthouse off the coast; two men are sent on a four-week shift to oversee it; one, Thomas Wake, an old hand (Willem Dafoe) and the other, Ephraim Winslow, a young newcomer (Robert Pattinson). When their replacements never arrive, they are forced to ration their supplies and subsequently descend into a drunken madness admist a tempest. The spartan setup gives the two actors a lot of room to roam, but also a lot of rope to hang themselves. Pattinson’s performance is impassioned, if uneven; Dafoe is the one who manages to keep the whole thing from blowing away in the wind. Eggers’ interest with atmosphere and world-building shines through, and one can feel the quest for authenticity in the compact, grainy film treatment, the heavy clanking lighthouse machinery, the way the characters dress and speak, and everything in between. However, granting these raw materials were there to begin with, ultimately the film’s ability to synthesize them into something interesting is hamstrung by a relentless desire to challenge, subvert, and flagellate.

The wide theatrical release of The Lighthouse was buoyed by press a certain kind of film attracts these days: a cycle of retellings of its origin story and laborious production—notably, the construction of an actual lighthouse on a piece of barren rock in Nova Scotia—as well as the various hijinks of its two leading men. Robert Pattinson claimed he punched himself in the face and drank mud before scenes. The film’s legend preceeded it in a manner similar to Iñárritu’s The Revenant, also infamous for its grueling on-location shooting, dogmatic realism, and debasement of its own star, DiCaprio. In both cases, the mechanics of the film’s production arouse more fascination and accolades than the film itself, a trend that has recently found footing with films shot on an iPhone (Unsane), featuring non-actors (American Honey) or real-life relationships (The Souvenir), or utilizing CGI-assisted fur (Cats). The dual character of an unusual production choice is that it can both make an artistic statement more effective and serve as kindling for the ever-important “buzz” that can make a release critically (if not financially) successful. The danger is in the film being too fashionable for its own good. 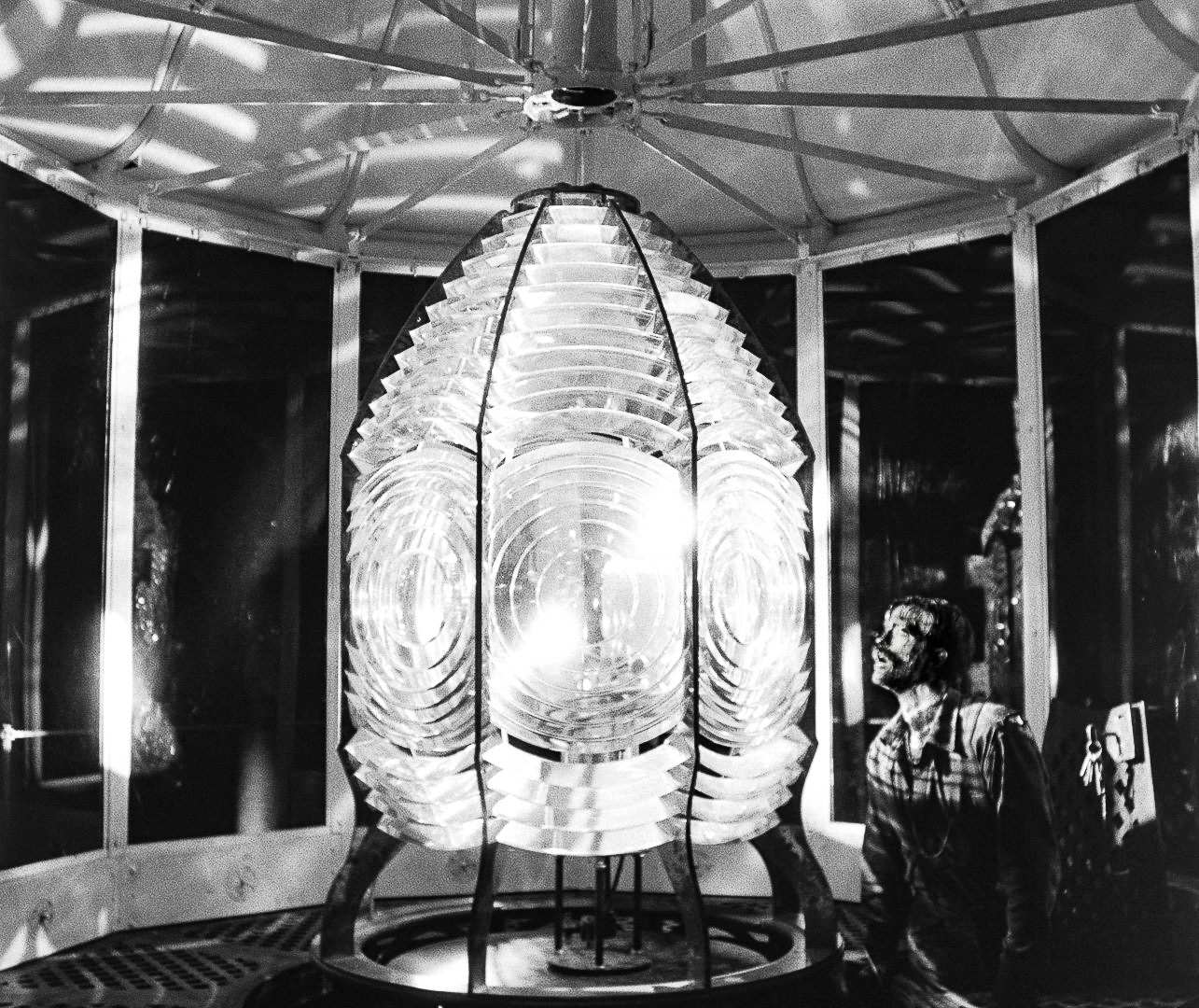 From the first moment in The Lighthouse, a few such unique aesthetic decisions with regards to the cinematography are clear: the film is in black and white, it’s gritty, and it’s in a narrow aspect ratio. Eggers used actual black and white film stock as opposed to applying such an effect in post-production, a decision that required incredible intensity of lighting to prevent underexposure. Combined with lenses designed in the 1910s and 1930s, the result is an effect that most viewers would simply describe as “old-looking”. But one wonders if the utility of the approach extends beyond the generation of “did-you-know?”-style factoids. The modified aspect ratio certainly recalls productions of a long bygone era, and while it is used to some effect in sequences such as a close-cropped vertical boom shot up the length of the lighthouse’s exterior, the constrained frame feels gimmicky, as they often do.

The narrative style Eggers employs in the script likewise seems designed to provoke a reaction. As if aware of its own aesthetic preoccupations, the film undercuts itself, regularly featuring crude humor around flatulence and feces but also disrupting dramatic energy with lazy punchlines, such as Wake’s lengthy condemnation of Winslow around the latter’s insult to his cooking; the intensity of Dafoe’s performance in this scene (already canonized as a meme, with those in the know additionally parroting the fact that Dafoe reportedly performed the scene in just one take) is immediately evaporated by Winslow’s retort that, OK, maybe the food isn’t that bad. Moments like this are frustrating because they show that something stronger could have arisen out of the combination of setting, cast, and narrative seed. Instead, the film treats dramatic energy frivolously. While the mixing of humor and horror is of course not intrinsically a mistake and genre-blending or genre-defying films are possible and often interesting, this film reads as merely self-deprecating, using laughs to disguise a lack of confidence in its chosen direction. Eggers’ wife said it best: “I don’t think this is as funny as you think it is.”1

The question then is what is its chosen direction? Mythology and the supernatural are central to Eggers’ acclaimed 2015 film The Witch (also a period horror, set in a desolate 1620’s New England wilderness), and he carries this focus into The Lighthouse. Much of Wake’s dialog, calling forth Triton, Proteus, Poseidon and the like, seems at times plucked straight from Melville and in fact this is even cheekily referenced by Winslow, who becomes fed up with Wake’s “Captain Ahab horseshit”. Though sound from a historical perspective—the film’s events take place a few decades after the publication of Moby Dick—the idea of these two characters being aware of the book or its characters stretches the imagination. The remark serves as joke shared with the audience and, in conjunction with the decision to casually give the Icarus story a Prometheus ending (Eggers claims the latter as inspiration2), undermines any investment in myth. Throw in a boatload of symbolism around the phallic lighthouse, keys and locks, mermaids, vengeful gulls, a violent sea and so forth, and we’re left adrift, not knowing where we’re meant to be, but also not caring.